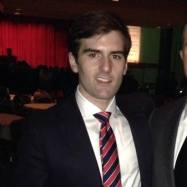 Born and raised in the NY metropolitan area, lifelong New York Giants fan.  Began collecting and memorizing the back of baseball cards at the age of five.

A graduate of Lehigh University with a degree in Finance & Accounting.  At the age of 20 began his career on Wall Street as a leveraged finance investment banker, advising corporations on capital raising, restructuring, mergers & acquisitions.  Licensed Securities Representative, holding a series 79 & 63 license.

On a never-ending journey to understand the business of sports. Exploring the decision making processes within NFL & MLB front-offices is my passion and CapFigure has become the venue by which I continue to explore it.

A so-called “fair weather” New York Mets & New York Jets fan, Ryan’s love of sports comes through in his sizzling hot-takes and witty banter. Ryan’s love of Chad Pennington is unmatched by anything else, a trait of a tried and true New York sports fan.

When he’s not gauging the MLB moneylines, Ryan can be found dominating newbs in MLB The Show.

One thought on “About Us”