There’s nothing like an AL East match-up to determine first place at Fenway Park to get the juices flowing.  Alright its mid-June and its the Orioles not the Yankees but this sets up to be a tantalizing affair none the less.  For today’s pick, I will be putting my money on the surging Boston Red Sox .

Hard throwing lefty Eduardo Rodriguez takes the mound for the Sox, against his former team the Orioles.  Rodriguez was the key asset in a package that the Orioles sent to the Red Sox back in 2014, in order to acquire elite reliever Andrew Miller.  The Orioles were not able to capitalize on that rental and Miller went on to sign with the New York Yankees a few months later.  Rodriguez starred upon his arrival in the big-leagues last year but faced a subluxation of his patellar tendon to start the 2016 season.

My expectation is that Rodriguez will come out and deliver a strong performance today against the Orioles. If the young left-handed starting pitcher can command his plus fastball, to both sides of plate, Boston will have no problem taking the deciding game of this series in front of the Fenway faithful.

The Red Sox lead the AL in nearly every critical offensive category, entering Thursday’s slate of games.  With team batting statistics of: .291 Batting Average, .481 Slugging Percentage, .357 On-Base Percentage and 377 Runs Scored; the BoSox have arguably the deepest line-up in all of the majors. Everything seems to be clicking offensively for Boston, with David Ortiz looking like the “Big Papi” of 2007 and erratic slugger Hanley Ramirez beginning to heat up. 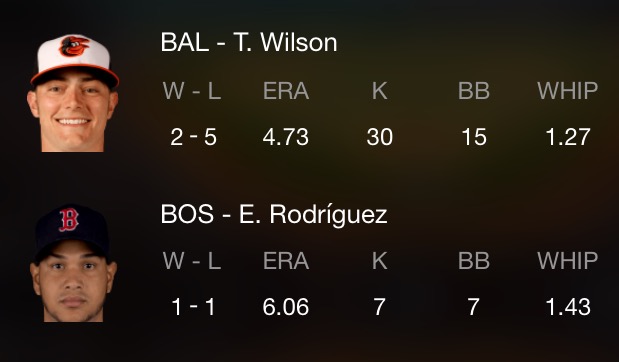 You can track all of JD’s picks here: JD’s Pick Tracker